15-year-old Maine Para-equestrian Has His Eye on Tokyo 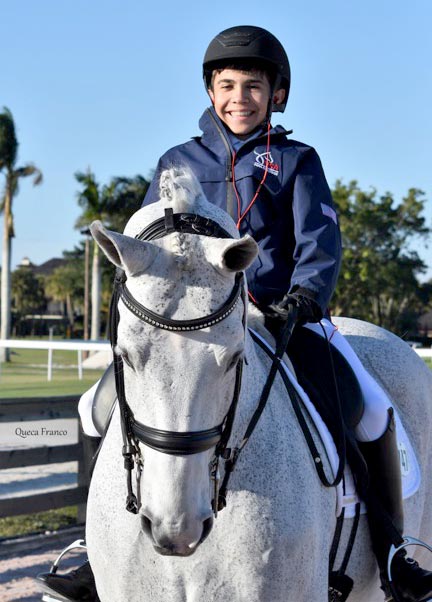 In many ways, David Botana is a typical 15-year-old. Of course, he is a straight-A student who excels in his college prep classes, but he also likes playing video games, has a soft spot for most animals, including his pony and best friend Rocky, and enjoys hanging out at the barn, where he rides. Or rather, trains. David is a Grade 1 para-equestrian rider—the classification for the riders with the most severe disabilities. He has VATER Syndrome, which is a cluster of malformations that can occur early in childhood development, and he has overcome innumerable physical challenges in his 15 years. And as an athlete, David has a lot of potential – potential that could take him all the way to the 2020 Paralympics games in Tokyo representing Team USA on a Grand Prix stallion.

That horse is Lord Locksley, a magnificent 17-year-old Trakehner stallion owned by Margaret Stevens. Locksley normally competes at the Grand Prix level with Susanne Hamilton, a USDF Gold Medalist, FEI trainer and R judge, who has developed the horse for the past nine years. David works with Hamilton at Crystal Spring Farm in South Montville, Maine where he had been training on Rocky since the family, Rocky included, moved to Maine from Indiana in 2016. 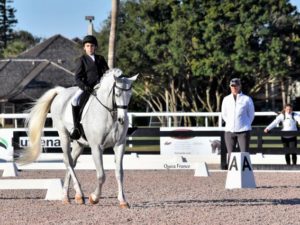 In David, Hamilton discovered a positive inner spirit, she said, and her experience told her he had a drive that would make him a successful competitor. She knew that Lord Locksley was sensitive and could accommodate David’s differences in riding and provide the quality gaits needed for the international para dressage level that Rocky couldn’t. In November of last year, she suggested the pairing to David and his mother. David couldn’t believe his ears. The horse was tall, with long strides, a big difference from Rocky. Locksley and David would have to learn to work together to communicate in a way the horse wasn’t used to. But the match was a synergistic one, with David learning to ride a Grand Prix horse, and Locksley using the lessons for Grade 1 para dressage as warm up for his Grand Prix training.

“David is a wonderful, personable and caring young man, beautiful both inside and out, with an old soul,” Hamilton told the Lucerne Farms Blog. “He has the feel, love for horses, and competitiveness to make it all the way to the top in para dressage.” David was not only the right rider for Lord Locksley, he had a drive that belied the challenges of his body. David’s VATER syndrome means he has vertebral anomalies, malformations of his trachea and esophagus, a single right kidney, and malformations of his radial bones. His left arm is missing his radial bone altogether and his thumb, he wears a splint to hold his hand in a rigid position. His left arm is about a third shorter than his right. On his right hand, the radial bone is fused to the ulna bone so it’s stiff and lacks muscle. Scoliosis affects his shoulders and pelvis. A total spinal fusion at age seven means David has a very short torso which won’t grow. While his mother refers to him as “a bit of a medical miracle,” she underscores that he is also healthy and stable. But working through pain and fatigue is, for David, just a typical training day. 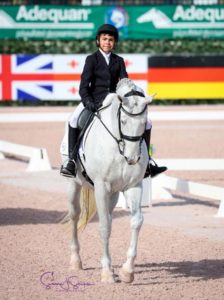 The characteristics that were evident to Hamilton started to become evident to others. David competed in his first international para-dressage CPEDI3* in Florida in January, and it was an impressive debut. Michel Assouline, the USEF High Performance Consultant and Head of Para Coach Development called him a “young star in the making.”

“The best is watching Locksley take great care of David when he rides, and then watching him turn back into the gallant puffed up stallion once David is off- they both really do adore each other,” David’s mother, Suzanne Botana, told the Lucerne Farms Blog. “David has learned to relax more and still keep Locksley round and through which elongates his stride and allows him to bend more. These are significant improvements that are accomplished with more and more rides together.”

David is currently ranked number one in the country in the preliminary USDF year-end para-equestrian, Grade 1, a tremendous accomplishment for a new rider. “Though this team is new, they are mighty!” said Botana. In June, David competed at the University of New Hampshire, and this past July he took part in Life’s a Ride in New Hampshire – both high-level national competitions. David won his class and High Point.

Following his CPEDI3* debut, David was named a recipient of the 2018 Christian Kennedy Future Stars Scholarships, which provided a month of free training with the United States team coach Robert Dover in Florida. He also received a Challenged Athlete Foundation competition grant and was awarded a travel grant from the Jonathan Wentz Foundation. Not only did the awards represent an acknowledgement of the promising talent of this new competitor, they made the dream of representing the USA in Tokyo in 2020 look more like a reality.

Over the summer, David has continued to train and save for competition costs for Florida 2019, in addition to taking a creative writing class (“just for fun”) and enjoying the summer a little, too. But the goal of 2020 is ever closer, and international competition and training comes at tremendous cost: competitors have a trainer, horse, rider, and sponsorship, if not independent wealth, and the international competition costs equate to several thousand per competition. Last year, finances limited David to competition in one CPEDI.  Missing a competition is difficult, because maintaining and improving his standing is dependent on competing as much as possible.

New partnerships with Lucerne Farms and Blue Seal have helped. Blue Seal hosted a picture opportunity in June with “Pugs and Kisses of Maine” in which donations were collected as customers met David and took pictures with a mob of adorable pugs. But David will require additional support to reach his goal and continue to compete. “He is itching for scores in the 80s,” said Botana. “And we think it is possible!” (Follow David & Lord Locksley’s standing here.)

And as for Rocky? Thanks to Lord Locksley’s Grand Prix travel and training schedule, David enjoys plenty of time riding him. “And whenever they can’t ride, David always has time to feed him carrots,” said Botana. After all, he’s just a typical boy, devoted to his best friend.

Those interested in sponsorship can contact Suzanne Botana directly at [email protected] or 630-632-1536.  There are tax deductible options. You can also support David at his  GoFundMe page.