How To Reduce Ammonia in Poultry Houses in Winter 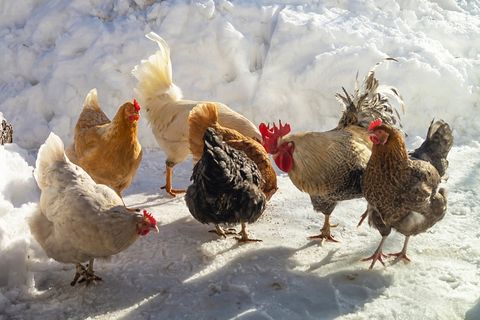 It’s true, the smell of ammonia may be stronger in the summer months, with the sun beating down on manure and heating up the dirty coop bedding. However, that doesn’t mean that ammonia is gone in the winter.

In fact, ammonia is just as dangerous in winter. While the odor may not be as noxious, ammonia gas does damage to the respiratory system before the nostrils are able to detect it. Ammonia is a health risk to your chickens, stressing the upper respiratory airways and placing them at risk for pneumonia and other serious illness. That’s why it’s so important to know how to reduce ammonia in poultry houses in winter.

In the winter, the effects of ammonia in chicken coops can actually be magnified, as chickens are spending more time inside, and therefore spending more time in an environment full of ammonia. In the winter, there also tends to be less ventilation in the coop, with doors and windows closed in an effort to keep chickens (and humans) warm. This traps the ammonia in the nesting boxes and the rest of the coop.

There are a number of ways to lower levels of ammonia in the coop, starting with cleaning stalls and run-ins on a regular basis (no matter how cold your fingers may be!). The liberal application of chicken coop bedding, such as Koop Clean, in the coop and nesting boxes effectively eliminates ammonia. Sweet PDZ, the active ingredient in Koop Clean, is made from zeolites and effectively neutralizes the ammonia gases. In addition to these measures, keeping the coop well ventilated will also aid in your chickens’ respiratory health (but make sure that they do not catch a chill!).

Snow and ice may be at the forefront of your mind during the winter, but make sure that you continue to fight ammonia as well. Ammonia control in your poultry house is essential to the well-being of your chickens.